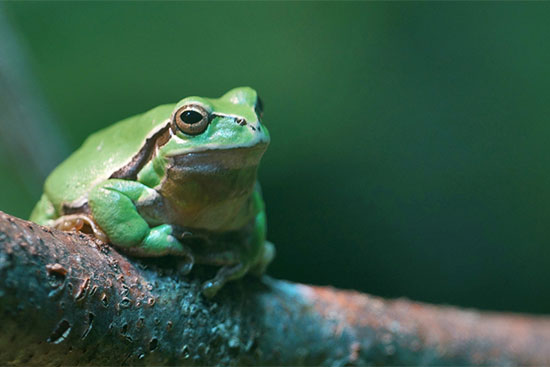 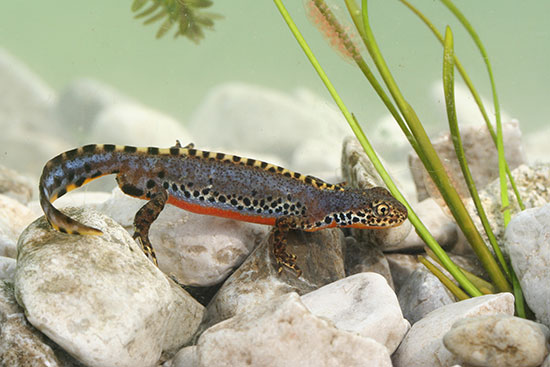 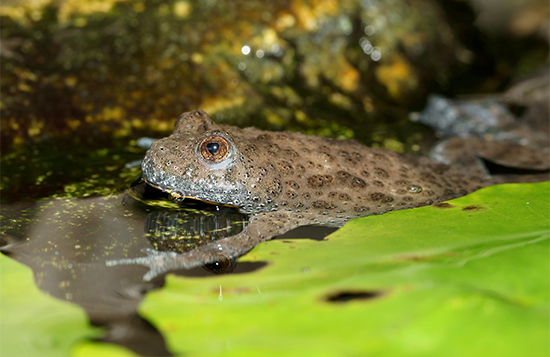 Upon entering the Aqua-Terrarium you will immediately see a large water basin resembling a typical reed habitat. This basin is home to various small fresh water fish and our European pond terrapins, a species originally confined to the climatically more temperate low-lying areas of the Alps.

Our Aqua-Terrarium houses various frog and newt species native to the Alps. The crested newt is a rather large species. During breeding season the male develops a pronged crest on its back and a silver-grey stripe along its tail. The crested newt can live in the water the whole year round but in some areas the species spends prolonged periods of time in terrestrial habitats. The same is true of another smaller species – the smooth newt. The male of this species not only develops a pronged crest on its back and a stripe along its tail during breeding season, it also has a bright orange belly and is covered with black spots.

The marsh frog is the largest European frog species. It has a very distinctive, loud and often raucous call which can be heard from great distances. If you want to listen to the call of the marsh frog you can play it at our show-case „Calls from the Reeds“.
The only tree frog to be found in Europe is the European tree frog. The well-developed adhesive discs at the tips of the frog’s toes enable it to climb bushes and trees with no trouble at all. It can even climb glass. It can also alter its colour quite rapidly to match its surroundings. Whereas the marsh frog has two prominent vocal sacs at the side of its mouth, the tree frog has only one externally visible guttural vocal sac and its calls during breeding season are not only distinctive but also quite loud.
The smooth newt shares a terrarium with the yellow-bellied toad. The dorsum of the yellow-bellied toad is dark, almost black. When threatened or attacked the toad flips onto its back to reveal its orange-yellow belly as a warning to potential predators. The characteristic call of the toad during breeding season is a relatively soft „ung –ung“.